The system will detect labeled DNA, RNA and proteins or other labeled molecules on blots, gels or other substrates for qualitative and quantitative assays. Having the capacity for both chemiluminescence, fluorescence and IR will allow labs to detect multiple species of molecules in a single experiment. This imaging system supports applications of IR and Visible Fluorescent Westerns, Chemiluminescent Westerns, IR and Visible Fluorescent Protein Arrays, and DNA and Protein gel imaging, colorimetric and photometric imaging. 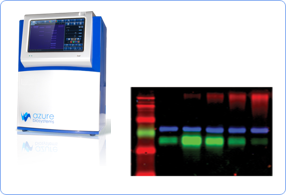 The system has Illumination light sources